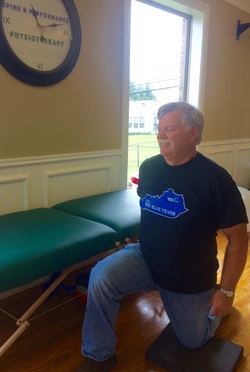 Ed Peterson is a Somerset resident and a very active retired teacher. It is not unusual to find Ed in his woodworking shop, in his garden, or out helping a neighbor with a chainsaw. For roughly the past two years, however, Ed had been dealing with low back pain that had gradually begun to decrease his function.
“My back pain was getting to the point that I didn’t want to walk any distance because I knew I would have pain, and squatting and bending forward were very painful as well. I knew I had to do something and had been looking for a good place to get treatment when I heard about Spine & Performance from a neighbor who’d had good results.”
Ed went to see Dr. Josh Harris at Spine & Performance to get help with  his chronic back pain and loss of function. He previously underwent back surgery in 2010, so he was no stranger to back pain and had received several forms of treatment over the years. He had very significant range of motion loss and posture deficits that were contributing to his problem. He received an evaluation via the McKenzie Method and he was quickly given a diagnosis of lumbar derangement. This is a common condition in the low back most often treated very successfully with specific repeated movements of the spine and hands-on techniques as needed. Ed has now been treated for 6 visits, and when asked about his pain and function he reported, “I’m probably close to 90% better.”
“It’s been nice to have someone take the time to explain my problem instead of just treating me. It’s been helpful to have things that I can do on my own. People need to be given things they can do on their own to manage their problem.”
Ed also reports, “I appreciate the fact that Josh spends at least an hour with me each session. I have experienced quicker relief with this treatment than any I’ve previously tried. The posture correction has been golden, and I’m now much more aware of how various postures affect my spine. Nobody has ever shown me these things before.”
When asked if he would recommend Spine & Performance to others he replied, “I can only speak for myself, and my experience has been a very good one. If someone would just come in and listen to Josh’s advice, it would probably help them.”
Dr. Harris treated me for soreness, pain and stiffness in my neck and shoulders. After 3 treatments, I had relief from all of the above. I was able to see much improvement in the movement of my neck from side to side and the pain and soreness was greatly relieved. Dr. Harris showed me how to exercise my neck and this has helped with continued relief. I have been pleased with my treatment at Spine & Performance and will not hesitate to contact Dr. Harris again if needed.  -Delle Hansford, Somerset, KY July 2016
​

Dr. Badjo Montreal, CA, May 2016 "I was suffering from low back pain that was diagnosed as light osteoarthritis in Montreal, Canada. I had some physiotherapy sessions while visiting my daughter in Somerset, KY. These sessions relieved my pain very well. Exercises that were recommended by the physiotherapist help me a lot. I am very glad to have had this experience at Spine & Performance."
-C. Badjo

J.B, Tennessee, May 2015 "To whom it may concern,
The first day I met Josh Harris, I could not stand up straight, bend forward or move my left leg easily and one of my elderly employees had given me a cane to use. Josh was extremely patient with me and helped me work through the pain. He knew exactly what was wrong and how to fix the problem. After that first session I was able to stand up straight and I could walk without holding onto the wall. He encouraged me each time I tried to do a new exercise.  Not only did he show me how to do it, he did it with me. When I first heard that Josh was leaving my area, I was disappointed and thought, 'what if I get hurt again, what will I do?' Then I realized that Josh had taught me how to take care of myself to the point that re-injury should not occur and what to do if it does. My self confidence is at its highest point in years. " -JB